"Cora-Mai was born at 9pm on Monday eve after only being induced at 3.15pm the same afternoon! It was a really positive experience.

The midwife did a sweep and put in the pessary at 3.15pm and by 3.30pm I was having really strong contractions lasting almost a minute and only 1-2 mins apart. They took the pessary out after about 2/3 hours to slow things down a bit, but I was just in natural labour by then and there was no stopping it.

When they checked after 3 hours of this there was no dilation and the cervix still needed to thin, so I opted for some pethidine, which was the only pain relief available at that stage as I was still on the ward. I guess it did take the edge off but not much, but what it did do was completely relax me so that I could even use some of my Hypnobirthing techniques and really breathe and try to relax my body during contractions. I found the process so much easier to cope with second time round and knowing what the different stages feel like [Jo's first birth was very intense!]

It was really quick at the end again. The midwife came to say they were going start filling a pool and take me up but I knew I was in transition and I probably wouldn’t make it. They went off to make beds and I had to get Ant to go and tell them that the contractions were starting to bear down.

So they rushed me up as quick as they could, crashing my bed into every lift and door frame on the way, haha. And as I got off the bed and crossed the corridor, her head came out as I walked through the door, so they just chucked a load of towels on the floor and caught her as she came out. It was quite funny at the end, they were all very shocked

I did tell them Asta was quick.

Anyway, thank you again so much for your help and advice. Both my babies would of been born far differently if it wasn’t for you and for hypnobirthing, and I really appreciate that - neither do I frown on pain relief because every one is different. For me a bit of help actually helped me achieve how I wanted things to turn out, so I feel in no way disappointed that it played a part.

All that said, I still don’t feel I had much to do with it. Our bodies are amazing and we really just sit back and let it do it’s stuff and try to be brave!

So, the moral of the story is ... I was induced, had pain relief and pretty much gave birth standing up in a corridor, but for me it couldn’t of gone any better

it was quick, uncomplicated and Cora-Mai and I are both totally undamaged, what more can you hope for?" 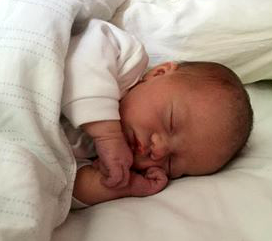