Birth is a journey, with different rhythms at different times.

Transition is that point where your body prepares to push your baby down the birth canal. Adrenaline-type hormones are suddenly released to bring on increasingly expulsive contractions.

As a side effect, it's completely normal for most mothers to feel some degree of self-doubt at this point - even if they've been breathing and relaxing effectively thus far.

It can sometimes feel like a 'top-of-the-rollercoaster' moment. Depending on how YOU get on with adrenaline, you may feel suddenly frightened, or indeed excited and exhilarated.

A mother's eyes might suddenly open widely, revealing alert and dark, dilated pupils. They can say odd things out of the blue, for example:-

"I can't do this anymore"

Or in one of my favourite Janet Balaskas birth videos -

Birth partners should be aware of and expect transition; to remind and reassure that you're doing a great job - after all, these feelings mean that you'll be meeting your baby before long.

For mothers - use whatever sounds, positions and breathing styles you like as you're heading down that rollercoaster!

"My contractions were strong and I began to become fearful of how I would cope [Klaire then chose to have a large glass of Zinfandel].... Ahhh that was a well deserved glass of wine, and really helped me to loosen up. I was laughing between the contractions and relaxing more and refocusing on the task ahead."

"By about 2am the surges were getting really strong but still not painful just really intense. I start vocalising instinctively on the out breath and find it really helps to release the tension. I am then sick during a strong surge and think I’m probably in transition – woo hoo! I start feeling pressure but the contractions aren’t expulsive yet. It doesn’t take long before I start grunting and feel my body pushing. I ask DH to get in the pool and he comforts me."

"The hypnobirthing breathing was absolutely essential as I moved towards transition and the contractions got really fast. Just when I doubted my ability to cope, the midwife brought gas and air at just the right time. The delivery suite was still full and I couldn't go upstairs! I think the midwives doubted how well I was progressing, until I got on the toilet and felt the urge to push! Then I was rushed upstairs very quickly and into the delivery suite. It was quite exhilarating then - I quite enjoyed it with the gas and air!"

"As we arrived at the hospital the surges were very strong and as we were walking through the corridors I began to have doubts and become fearful. I believe now this may have been transition. I managed to focus myself back into it and after being quickly admitted to a delivery room and being examined by a midwife, I was declared to be 8-9cm dilated."

"I genuinely thought I was dying in transition! I’m annoyed with myself for not realising at the time. My doulas kept saying “it’s ok you’re in transition” but I don’t remember this at all! I also took all my clothes off and drank 2 pints of water in one go because of a sudden I was so hot and thirsty!"

"My husband was so incredible during the transition, he remembered exactly what to say. I had coped amazingly, breathing through my contractions but when the transition came I felt like I was losing all control. All my husband did was touch my shoulder and say ‘relax, release’ and it took me back to ‘the zone’ I will be forever grateful. He was the best birthing partner! Pushing felt like heaven after that!

"I did start slapping myself all over my face and mouth which was probably some natural distraction thing, LOL"

“The strangest request I have encountered was that of a first-time mother who - just before pushing - asked her husband for a jar of peanut butter and proceeded to eat two heaping table-spoonfuls. She then washed the peanut butter down with nearly a quart of raspberry leaf tea and pushed her baby out. I was impressed.” 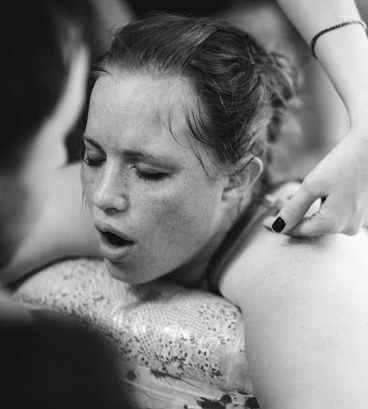